A model has put her old boobs up for sale after devoted fans offered her thousands for the second-hand implants. Glamour girl Taylor Rose, 26, has taken to Twitter to tout her old breast implants after inflating her latest pair to a whopping 30H.

And she hopes that she may be able to partly cover the cost of her recent operation after dedicated fans filled her inbox with cash offers.

Currently, the highest bid is £1,500 but the auction is set to continue for a further week.

Taylor, of Northamptonshire, said: “I wasn’t planning to do this at all. I had no idea people were interested in things like this.“But when I said I was going to have another operation, I started receiving offers.

“So I thought, why not?” Taylor was a 30G but wanted to go even bigger and when she mentioned it to her fans online, several asked if they could buy her old implants when they were removed.

She went under the knife last week and told her doctor of her plans. He agreed to save the manky old silicone enhancements, but only if the adult star signed a form confirming that she wanted to keep them.

Taylor said: “I think he thought I was mad.“But when I woke up, he had cleaned them and wrapped them in packages.“He’d even labelled which one was my left and right implant.” 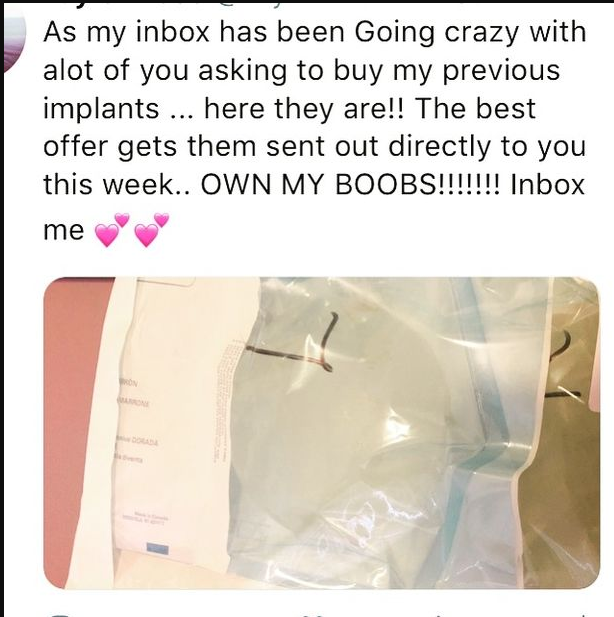 The popular cam girl hopes to be able to sell the implants for thousands, but insists she will throw in postage and packaging for free.And her friends and family think her latest stunt is hilarious.

Taylor joked: “They think its funny but they’re not surprised by it.“I’m quite a spontaneous person so when someone got in touch and asked if they could buy them, I just thought ‘why not’. “I’m happy to sell them separately if there’s a demand for it.“I have no idea what someone will do with them, maybe they’ll put them on the mantelpiece?”

Alongside the offers of cash, Taylor says she’d had some unusual requests for extras.

She said: “One man wanted to buy them but asked me to include a pair of worn pants. “And another wants me to wear a pair of trainers and get them really muddy.“Working at Babestation means I’ve got used to all sorts of crazy and unusual requests.”

Breast Augmentation | Before and After

Breast Augmentation | To Be Attractive Overview Breast augmentation, commonly known as augmentation mammoplasty, is a procedure that increases the size of the breasts. It includes inserting breast implants beneath the breast tissue or the Read more…

Labiaplasty | Surgery for Oversized Labia Overview Labiaplasty is a surgical procedure that reduces the size of the labia minora, which are the skin folds that surround your urethra and vaginal opening. Excess skin can Read more…

Who Is a Candidate for a Mini Tummy Tuck?

Who Is a Candidate for a Mini Tummy Tuck? The abdomen is a common area of concern for both men and women. Excess fat and sagging skin may be a result of aging, weight changes, Read more…